You are here: Blog / Mentor / Raiders vs Broncos – OLD FRIENDS 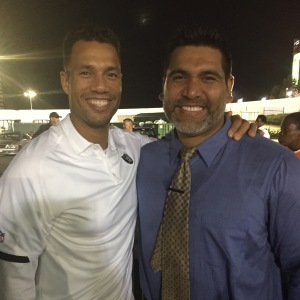 I played for the Raiders from 2007 – 2010.  Our record did not show it but my time with the Raiders will go down as one of the best times in my life.  I had a chance to move to the San Francisco Bay Area and experience the California weather.  one year I didn’t play in a game colder than 60 degrees both home and away.  You can’t beat that!  Summer Training Camp was held in Napa California.  (Need I say anything more about that?)  My family grew by 2 children out here in California and we have been able to meet some of the most incredible people that we call family and friends.

Fast forward to 2016.  My kids are at an age where they can do a lot for themselves, almost to the point that they are self sufficient.   My wife won’t let us leave them at home for a weekend getaway yet but we are working on it.  I have been blessed to reach thousands of students through my non-profit Beyond the Locker and I am serving my peers in the NFL as a Life Coach for current and former players.

ANDDDDDDDD….. the Raiders are on a role.  Last night I had the opportunity to watch the Raiders play the Broncos on Sunday Night Football.  What a game!!! Raiders come out with a win but I had an opportunity to meet up with one of my fellow brothers, Luther Ellis, who is the Chapalin for the Denver Broncos.  Luther played a bunch of years for the Detroit lions but more importantly, he is an awesome man.  He and his wife raise a family of 12 kids. (SHOULD I SAY ANY MORE?)  I have learned a lot from Luther from our time training to be NFL Transition Coaches but have learned even more just watching Luther  live his life as a light to others.

They say that listening is one of the greatest skills.  I am thankful honored and blessed to have crossed paths with such a gentle, purposeful man as Luther Ellis.