You are here: Blog / Uncategorized / On the field for the first time! 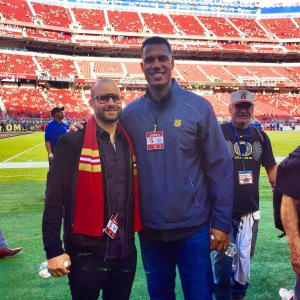 Have you ever been to an NFL game?  My first NFL game was when I was in grade school.  My best friend at the time was Ryan C and his dad took us to the Jets vs ? game.  I don’t remember much about the game but I remember being there with my friends.  I think the Jets were struggling during that time also, there wan’t much of a game to watch.  I was and still am an Eagles fan anyway.

I often think about the opportunities that have come my way because of my involvement in the NFL.  I have gotten to travel all across the country, meet people from all over the globe and have done some pretty cool things.  Playing on the field in front of tens of thousands of people has been one of those cool things.  After a while, the crowd fades in the background and it becomes normal to be on the field.

I had a chance to remember how special it is when a friend asked me to go to a San Francisco Niner Game.  I thought it would be special if I could get us on the field.  I reached out to a couple of my Niner friends and they were able to get us sideline passes.  I wish I could have seen the field from my good friend Brian’s eyes.  I remember my first game playing on an NFL field on the Kansas City Chiefs Arrowhead Stadium.  It was electric!!!

Here I was with one of my good friends on Thursday Night on the grass of Levi Stadium to watch the Niners vs the Cardinals.  Life has an awesome way of coming full circle.  Ryan and the Jets to Brian and the Niners.