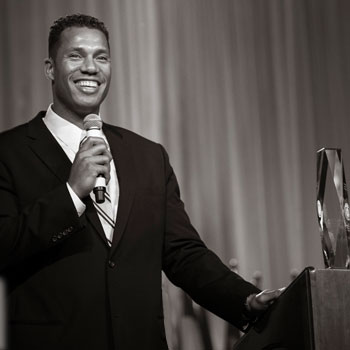 Tony Stewart is a former professional athlete with 14 years of experience in the National Football League. His on field experience has included playing with the Cincinnati Bengals, Philadelphia Eagles and the Oakland Raiders for 10 years. Tony is a Lead Consultant for the National Football League; coaching, training and facilitating leadership and character development programs. He is trained in the areas of conflict resolution, mental health first aid, suicide risk evaluation and transition.

Originally from Germany, Tony grew up in Allentown, PA and excelled in high school football enabling him to attend Penn State University on full scholarship. The Philadelphia Eagles selected Tony in the fifth round of the 2001 NFL Draft. The next year he left to play for the Cincinnati Bengals where he stayed for five seasons before finishing his career with the Oakland Raiders in 2010.

Tony’s main focus during his playing career was devoted to mentoring both his own peers as well as the youth of our nation. He was nominated by his former Cincinnati Bengals and Oakland Raiders teammates as a NFL Players Association union representative and was also recognized for his work in the community by being nominated for the prestigious Walter Payton NFL Man of the Year Award.

His most recent work as Founder/Executive Director of Beyond the Locker and his work with amateur and professional athletes received the attention of organizations and companies across the San Francisco Bay Area. The Oakland Raiders, UC Davis, Fremont Bank, Endicia, Fremont Unified School District and Kaiser Permanente are just a few organizations that have invested in the vision of the non-profit Tony started after his playing days were done.

One of Tony’s most recent accolades for his work with Beyond The Locker and his work with amateur and professional athletes was being awarded the first ever John C. Maxwell Leadership Award. He was 1 of nearly 3,000 nominees in 10 categories. “He demonstrates influential leadership in sports focusing on teamwork, communication, personal development, mentoring, community involvement, and coaching.”
– John C. Maxwell

Please contact us for to have Tony involved with any of your initiatives. Your organizations support combined with Tony’s expertise is a partnership that can provide tremendous value to your organization and its efforts.

Engaging and empowering audiences with tools of high performance in order to live
with intention and authenticity while making the biggest impact in life.